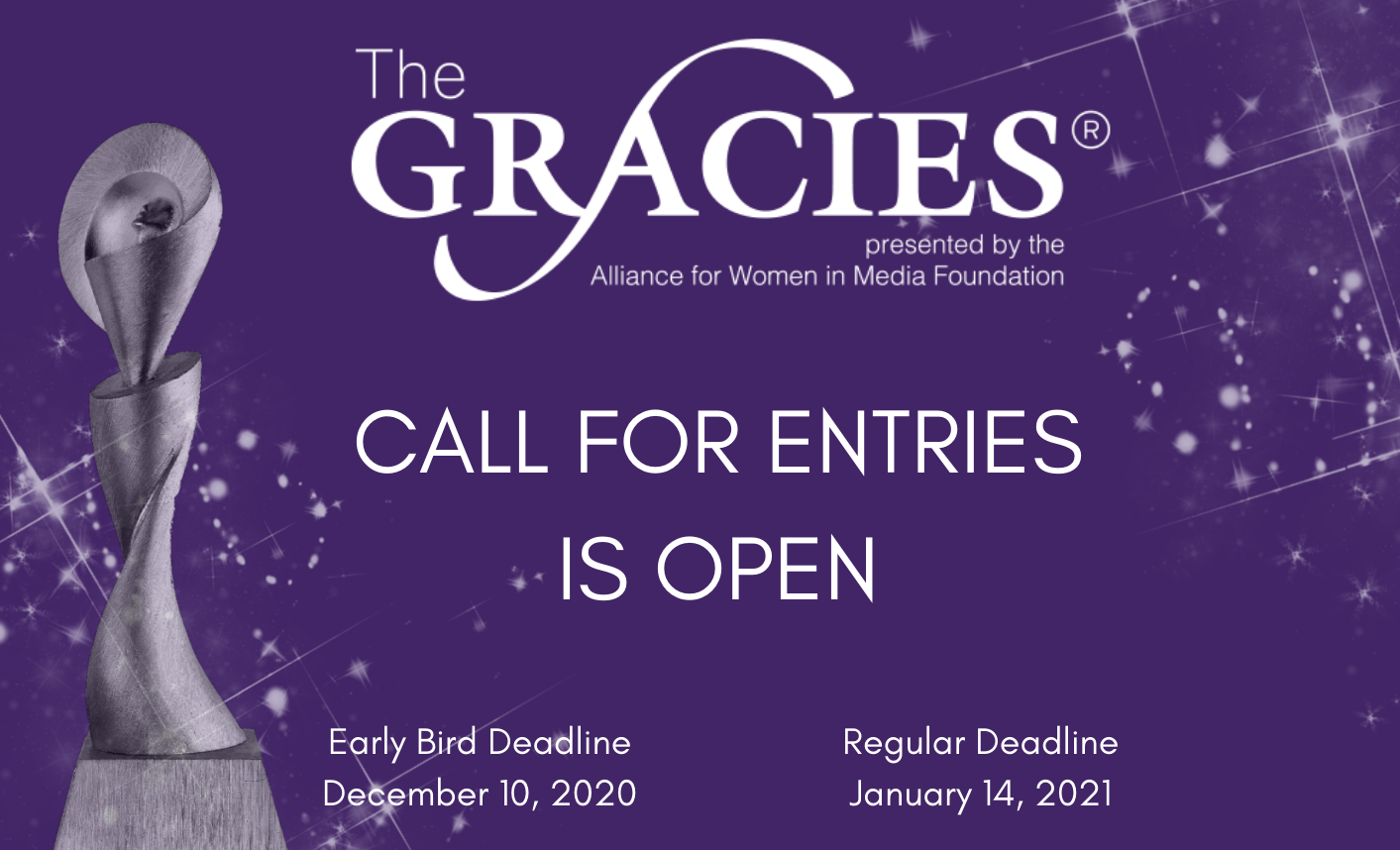 The Gracie Awards, presented by the Alliance for Women in Media Foundation (AWMF), has opened the call for entries for the 46th Annual Gracie Awards Gala and Gracie Awards Luncheon. AWMF is also pleased to announce Ziploc® Brand as the Diamond Sponsor of the 2021 Gracies.

“Each year, the Gracie Awards celebrate and honor truly exceptional content by, for and about women.  We know the circumstances of this year have made production much more difficult, which is why we are more committed than ever to honoring the remarkable work that has been created, especially with the important milestone of AWM’s 70th Anniversary coming up next year,” says Becky Brooks, AWMF executive director. “As our biggest fundraiser of the year, the Gracies enables the Alliance for Women in Media Foundation to deliver on its promise of furthering the connection, education and recognition of women in media, even during difficult times.”

The 2020 Gracie Awards were celebrated through an ongoing virtual experience. Highlights of the 2020 Virtual Gracies included honoring outstanding and powerful talent such as: Katy Perry as the Gracies Impact Award recipient; Danai Gurira of The Walking Dead; Gayle King of CBS News; Naomi Watts of The Loudest Voice; Juju Chang of ABC News’ Nightline; Angela Yee of Angela Yee’s Lip Service podcast; and, Natasha Lyonne, accepting on behalf of the producers of Russian Doll. Additionally, Dr. Sanjay Gupta delivered a Special Award Tribute to frontline journalists bringing COVID-19 and Black Lives Matter coverage to homes across the United States.  Malin Åkerman and many other presenters joined Susan Kelechi Watson, from This Is Us, as our host and Mickey Guyton as entertainment for the night. Footage from the virtual experiences can be found at https://allwomeninmedia.org/gracies/2020-gracie-awards-content/.

The 2021 Gracie Awards entry eligibility air dates are from January 1, 2020 through December 31, 2020. Early Bird rates for entries end on December 10, 2020, at 11:59 PM Eastern. The deadline for all entries is January 14, 2021, at 11:59 PM Eastern. Entry details including pricing, updated categories can be viewed at https://allwomeninmedia.org/gracies/call-for-entries/.

With the generous of support of NCTA – The Internet & Television Association, the newly announced NCTA Gracies Scholarship will provide 10 scholarships to assist with the costs of Gracie entries. Learn more about the scholarship at https://allwomeninmedia.org/foundation/scholarships/.

To see more information about the Gracie Awards, visit https://allwomeninmedia.org/gracies/. The application to judge the Gracies will be available soon.