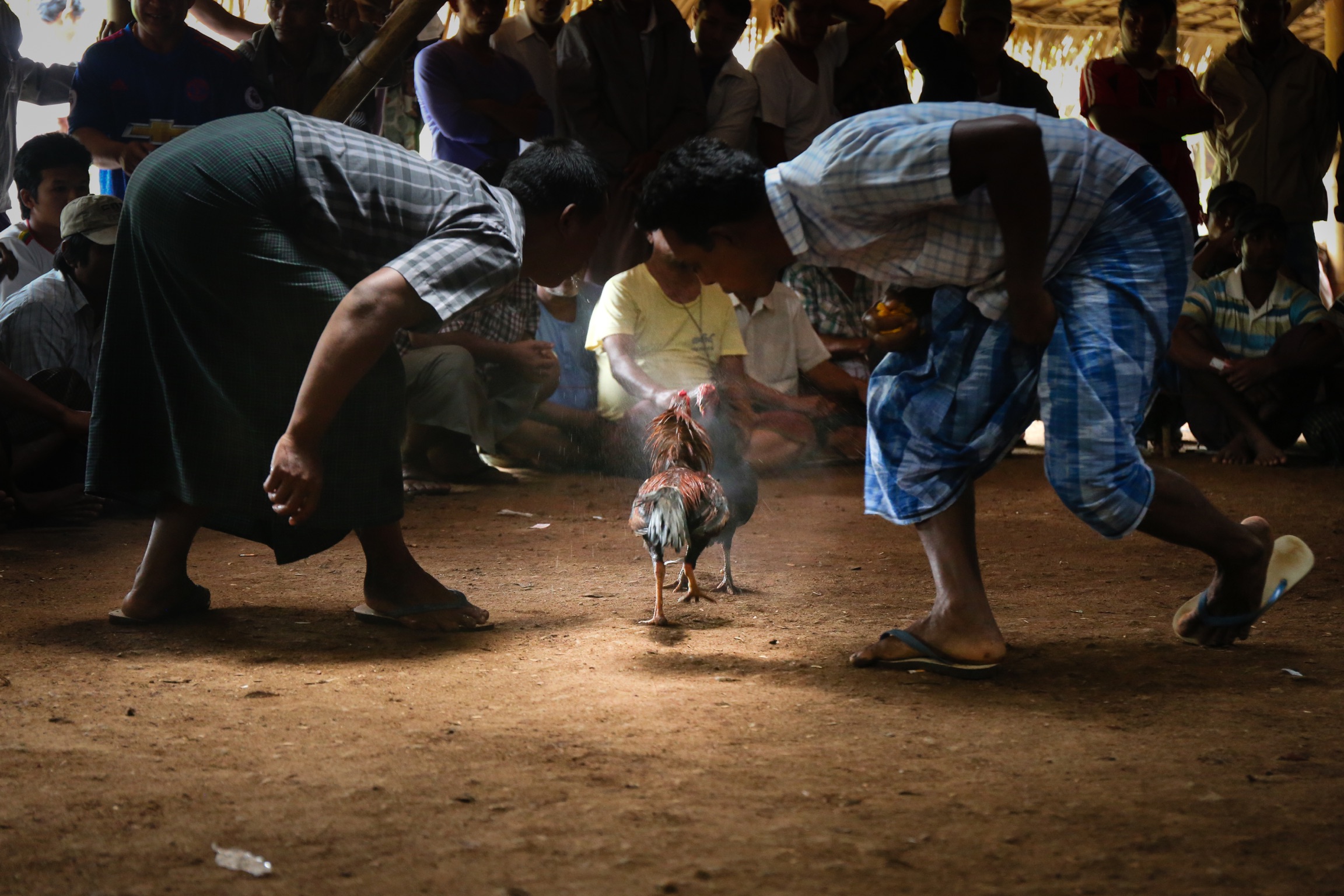 A Lady at a Cockfight

Since diving head-first into the world of journalism, I’ve spent countless hours reading books, articles and reports about sexism in the industry. There’s no denying it: statistically, women are at a disadvantage to their male counterparts.

A recent study found that women, on average, represent, “a disproportionately large section of the lower paid groups and a disproportionately small section of the best paid of the photographers globally.” In a separate study it was reported that 64% of the female journalists who responded said they had experienced “intimidation, threats, or abuse” in the field or in the office. I, too, have personally been groped, spit on, threatened and harassed while on assignment– largely due to my unwelcomed Y chromosome.

Yet despite these ominous statistics, I recently found myself sitting ringside at an illegal cockfighting complex in southern Myanmar, feeling more grateful than ever for being a woman.

Three weeks earlier I had asked my editor if I could pursue a story on cockfighting. It turned out that one of the other editors had already been attempting to write about it, facing several issues in gaining access. Ever supportive, the editors told me to check back in a few weeks to see if we could potentially collaborate.

As the weeks went by I ramped-up my research, befriending cockfighters online, messaging them regularly to check-in and build trust. I understood the delicate position I was putting these men in: I would have photos, names and home addresses of people engaging in illegal activities—why should they trust me, a foreign woman who couldn’t even speak their language?

Yet there I was a few weeks later, sitting next to the owner of the cockfighting ring, taking photos and interviewing attendees. Aside from the owner’s wife and a young girl making food, I was the only woman there; I would later find out that I was the only foreigner who had ever been granted permission to attend a fight in this particular region.

After a long day at the ring I found myself sitting in a van with four of the cockfighters, unable to stop the question from leaving my mouth:

My question was met with a smile and a shrug.

“You didn’t seem like a threat. We decided to trust you.”

In Burmese culture women are still largely excluded from traditionally “male” activities (such as betting and fighting). My presence, as a 5’6” young woman, presented no physical threat to my cockfighting comrades. My lack of testosterone made me it easier to be seen as a guest rather than as competition. In this instance, being a woman made it much easier for me to go where my male counterparts could not, and my piece became the cover story the following week.

So while you may never hear me say “women have it easy” in journalism, there is a chance that you’ll find me at an illegal cockfighting ring, camera to my face and a notebook in my hand.

Victoria Milko is an independent multimedia journalist based in Washington, D.C. In the past year her passion for storytelling has taken her from the back rooms of underground sex clubs our of nation’s capital to illegal abortion sites in Myanmar. Between assignments Victoria is working towards earning her Master’s degree in Multiplatform Journalism from the University of Maryland Philip Merrill College of Journalism. She is a recipient of the Emerging Voices Scholarship through AWMF and the Ford Foundation.