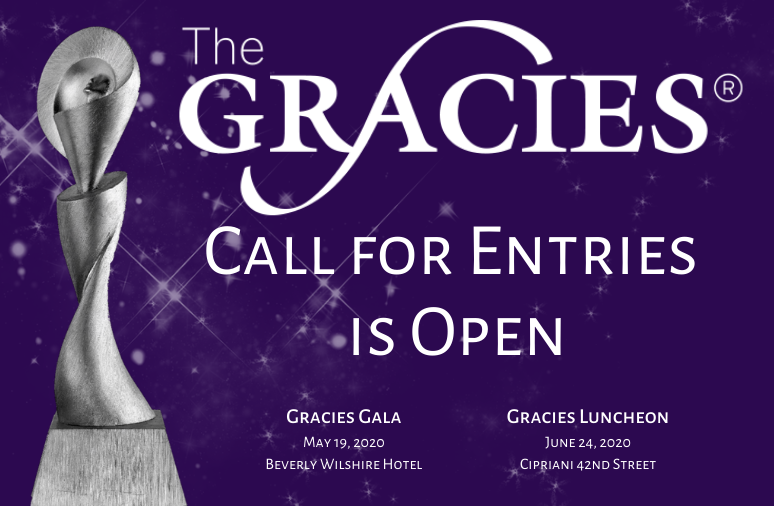 The Gracie Awards, presented by the Alliance for Women in Media Foundation (AWMF), has opened the call for entries for the 45th Annual Gracie Awards Gala, May 19, 2020, at the Beverly Wilshire, Beverly Hills, A Four Seasons Hotel, and Gracie Awards Luncheon, June 24, 2020, in New York City at Cipriani 42nd Street.

“Each year, the Gracie Awards celebrate and honor truly exceptional content by, for and about women.  It is our belief that recognizing expertise, courage and contributions across television, radio and interactive/digital media is essential to ensuring continued growth for our industry,” says Becky Brooks, AWMF executive director. “As our biggest fundraiser of the year, the Gracies enables the Alliance for Women in Media Foundation to deliver on its promise of furthering the connection, education and recognition of women in media.”

Serving again as chairs for the 2020 Gracie Awards are Mike McVay, president, McVay Media Consulting and Alliance for Women in Media Foundation board members Heather Cohen, executive vice president, The Weiss Agency and Annie Howell, co-founder and managing partner, The Punch Point Group. Vicangelo Bulluck, an Emmy Award-winning, seasoned veteran in awards production, has produced the Gracie Awards since 2016 and will return to produce the Gracie Awards Gala in 2020.

Each year, attention is given to evaluating categories, and this year that included adding a category for showrunners in television and creating more avenues for radio hosts/co-hosts by adding categories for Outstanding News Anchor and Weekend Host Personality.

Highlights of the 2019 Gracies included honoring outstanding and powerful talent such as: Leah Remini for Scientology and the Aftermath; Christina Hendricks & Retta accepting on behalf of the cast of Good Girls; Elizabeth Perkins of Sharp Objects; Angela Yee of top-rated Breakfast Club morning radio show; Rachel Bloom of Crazy Ex-Girlfriend; and, Hannah Storm & Andrea Kramer as the first female NFL sports commentating team.  Melora Hardin and many other presenters joined Lauren Ash from Superstore as our host and Sheryl Crow as entertainment for the night.

The 2019 Gracie Awards entry eligibility air dates are from January 1, 2019, through December 31, 2019. Early Bird rates for entries end on December 12, 2019, at 11:59 PM Eastern. The deadline for all entries is January 16, 2019, at 11:59 PM Eastern. Entry details including pricing, updated categories can be viewed at https://allwomeninmedia.org/gracies/call-for-entries/.

To see more about the 2019 Gracie Awards, including the media release and past video, visit https://allwomeninmedia.org/gracies/.