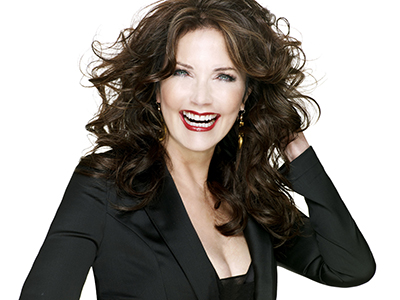 May 9, 2016 (Washington, DC) – Lynda Carter will be honored with the Lifetime Achievement Award at the 41st Annual Gracie Awards Gala on May 24 at the Beverly Wilshire Hotel in Beverly Hills, the Alliance for Women in Media Foundation (AWMF) announced today. The Gracie Awards honor outstanding individual achievement and programming by, for and about women.

“Lynda is the definition of a trailblazer as she has paved the way for women in media, carrying a national television show as Wonder Woman, and producing and starring in five highly rated network television specials,” said Kristen Welch, AWMF Chair and SVP, Global Content Operations at Discovery Communications. “Her success on screen, on the music charts and on stage showcase her talent and drive to break down barriers. We’re proud to honor Lynda with the Gracies Lifetime Achievement Award.”

Widely known for her role as the original Wonder Woman, Carter’s success has spanned throughout acting, singing, songwriting, Broadway and even beauty pageants, being crowned Miss World-U.S.A. in 1973. She has been a headline performer in Las Vegas, at Jazz at Lincoln Center, The Kennedy Center for the Performing Arts, and prestigious concert halls around the world. For more than a decade Lynda was the “face” of Maybelline Cosmetics in television commercials and print ads. In addition to her success as an entertainer, Carter has devoted her life to better the lives of others through her involvement with charities and organizations such as Race For The Cure, Ronald McDonald House, U.S.O., GLAAD, God’s Love We Deliver and Father Martin’s Ashley Recovery Center.

“I’m deeply honored to have been chosen to receive this special award,” said Carter. “The fact that it is being given by my peers in the industry makes it particularly special and meaningful. In the course of my career, I’ve watched so many talented women fight for their rightful place in this wonderful industry, and today it is highly gratifying to see the widespread success so many have achieved. I am grateful to the fabulous women who came before me and built the foundation for my career, and I salute those who will be leading us in the future. I look forward to celebrating all women in media at the Gracie Awards as I accept this award.”

The Gracies recognize exemplary programming created by women, for women and about women in all facets of media and entertainment, as well as individuals who have made contributions to the industry. The Gracies are presented by the Alliance for Women in Media Foundation, the philanthropic arm of the Alliance for Women in Media which supports educational programs, charitable activities, public service campaigns and scholarships to benefit the public and women in the media. The Gracie Awards, established in 1975, honor programming and individuals of the highest caliber in all facets of radio, television, cable and web-based media, including news, drama, comedy, public service, documentary and sports. Awards are presented at the national, local, public and student levels in radio, TV and interactive media. For more information about the 2016 Gracie Awards, please visit www.thegracies.org. Sponsors of the 2016 Gracies Gala include Ford Motor Company Fund, Crown Media, Sinclair Broadcast, National Cable and Telecommunications Association, Katz Media Group, Universal Television, CNN, FOX Sports, Disney/ABC/ESPN, SiriusXM and NBC News’ TODAY Show.