November 8, 2021 (New York City/Los Angeles) – The Gracie Awards, presented by the Alliance for Women in Media Foundation (AWMF), is proud to open the call for entries for the 47th Annual Gracie Awards. AWMF is also pleased to announce Crown Media as a Diamond Sponsor of the 2022 Gracies.

“The Gracie Awards celebrate and honor truly exceptional content by, for and about women. We know the circumstances of this year made production much more difficult, which is why we are more committed that ever to honor the remarkable work by so many in our creative community”, says Becky Brooks AWMF president. “As our most important fundraiser of the year, the Gracies enables the Alliance for Women in Media Foundation to deliver on its promise of further the connection, education and recognition of women in media, even during difficult times.”

The 2021 Gracie Awards were celebrated through an ongoing virtual experience. Highlights of the 2021 Virtual Gracies included honoring outstanding and powerful talent such as: Jewel as the Gracies Impact Award recipient; Taylor Swift with a Grand Award for folklore: the long pond studio session; Kelly Clarkson of The Kelly Clarkson Show; Gayle King of CBS News; Hoda Kotb & Jenna Bush Hager of TODAY with Hoda & Jenna; Sara Sidner of CNN Race & Unrest in America; and, Tracee Ellis Ross, Anthony Anderson and NAME, accepting on behalf of black-ish. The evening also included a special tribute celebration the 70th anniversary of the Alliance for Women in Media. Simone Biles, Glennon Doyle and many other presenters joined Lauren Ash, from Superstore, as our host and CeCe Winans as entertainment for the night. Footage from the virtual experiences can be found at https://allwomeninmedia.org/gracies/2021-gracie-awards-content/ .

The 2022 Gracie Awards entry eligibility air dates are from January 1, 2021 through December 31, 2021. Early Bird rates for entries end on December 16, 2021, at 11:59 PM Eastern. The deadline for all entries is January 20, 2022, at 11:59 PM Eastern. Entry details including pricing, updated categories can be viewed at https://allwomeninmedia.org/gracies/call-for-entries/.

With the generous of support of NCTA – The Internet & Television Association and SiriusXM, scholarships will be provided to content creators in need of support to enter for consideration. Learn more about the scholarship at https://allwomeninmedia.org/gracies/call-for-entries/.

To see more information about the Gracie Awards, visit https://allwomeninmedia.org/gracies/. The application to judge the Gracies will be available soon. 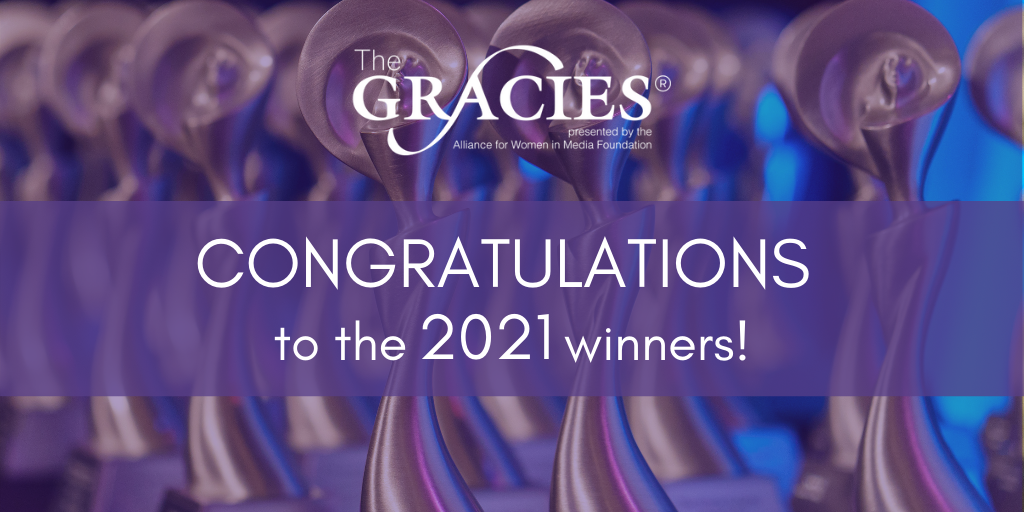 LOS ANGELES, CA (October 5, 2021) – The Alliance for Women in Media Foundation presented the 46th Annual Gracie Awards.  Due to the COVID-19 pandemic, the awards were held virtually and streamed on the foundation’s Facebook page.

Highlights from the awards include:

The awards also featured musical performances by Jewel and CeCe Winans. Between her acoustic performances of “No More Tears” and “You Were Meant For Me,” event host Lauren Ash presented GRAMMY-nominated singer-songwriter Jewel with the Gracies Impact Award. Later, GRAMMY award-winning American Gospel Singer CeCe Winans closed out the show with a performance of “Never Lost.”

To view the complete list of winners, their work and acceptance speeches, visit allwomeninmedia.org. 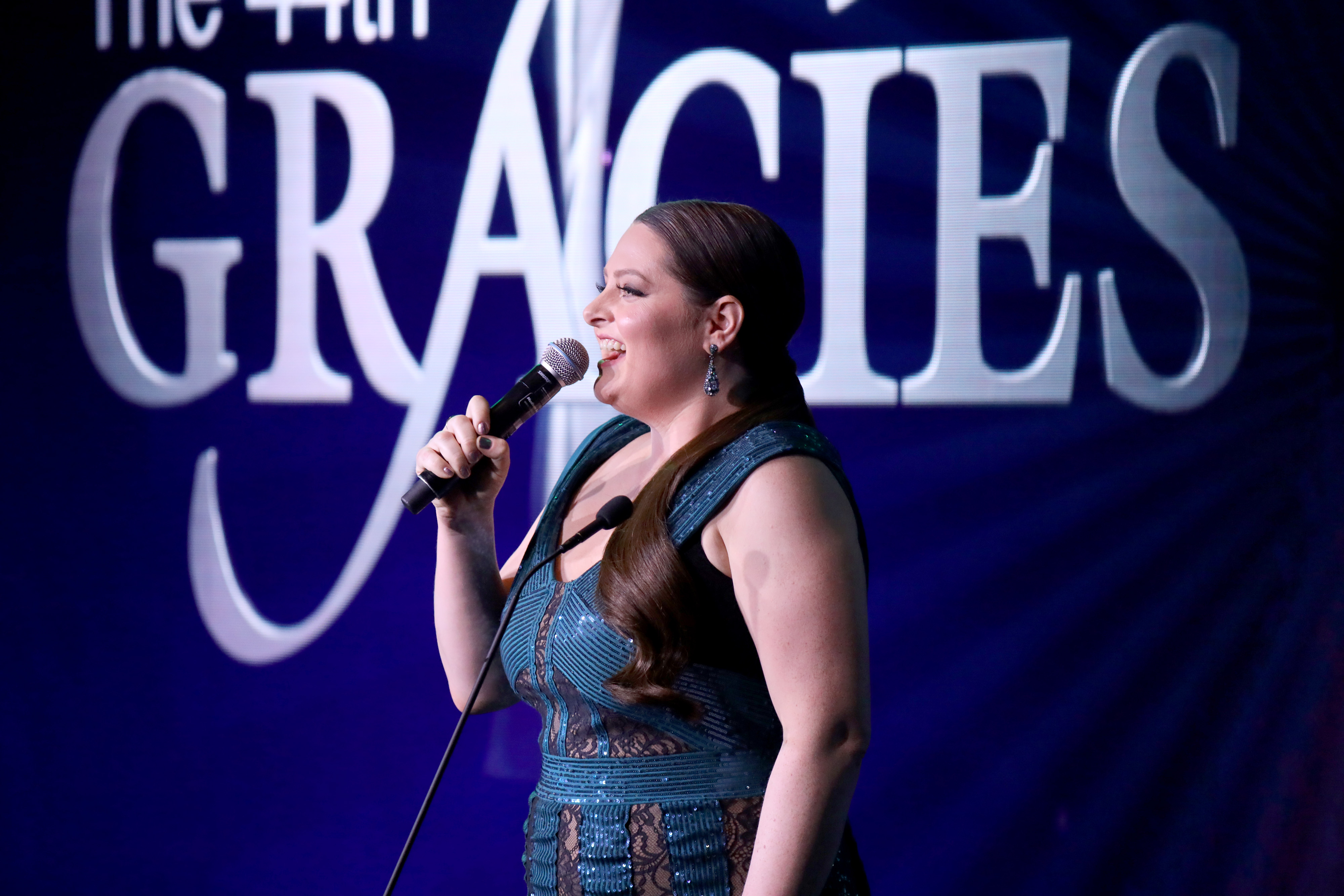 Alliance For Women In Media Foundation Presented The 44th Annual Gracie Awards May 21, 2019

Presenters of the Star-Studded Night Include Loni Love, Melora Hardin, and Aisha Dee

The Alliance for Women in Media Foundation brought together a packed house of industry leaders in front and behind the camera and microphone to support and elevate strong voices and inspiring storytelling. Host Lauren Ash led the room in helping usher in the 2019 Gracie Award winners whose stories spanned from uplifting and empowering narratives to stories that touched on important issues such as diversity, human trafficking and women’s reproductive rights.

Notable moment from the evening include:

About The Gracie Awards
The Alliance for Women in Media Foundation (formerly known as The Foundation of American Women in Radio & Television) supports and promotes educational programs, and scholarships to benefit the media, the public and allied fields. The Alliance for Women in Media Foundation has created partnerships and joint initiatives with the Emma Bowen Foundation, NCTA, NAB and other organizations that are philosophically aligned with the mission of the Foundation. In addition to giving $20,000 a year away in scholarships to deserving female students, the Foundation also produces nationally acclaimed recognition programs, including the Gracie Awards that honors exemplary programming created by, for and about women. For more information about The Alliance for Women in Media please visit their website at allwomeninmedia.org and follow them on Twitter (@AllWomeninMedia), (@TheGracies), (#TheGracies) and Facebook. Sponsors of The Gracies include Ford Motor Company; Beasley Media Group, Big Time with Whitney Allen, Crown Media Group, CNN, CBS Corporation, Cumulus Media, Discovery, Inc., Entercom, FOX Sports, Katz Media Group, NCTA – The Internet and Television Association, Netflix, NPR, Premiere Networks, Sinclair Broadcast Group, SiriusXM, Sony Broadcast Television, Sun Broadcast Group, TBS, TEGNA, Universal Television, vCreative and VICE Media. 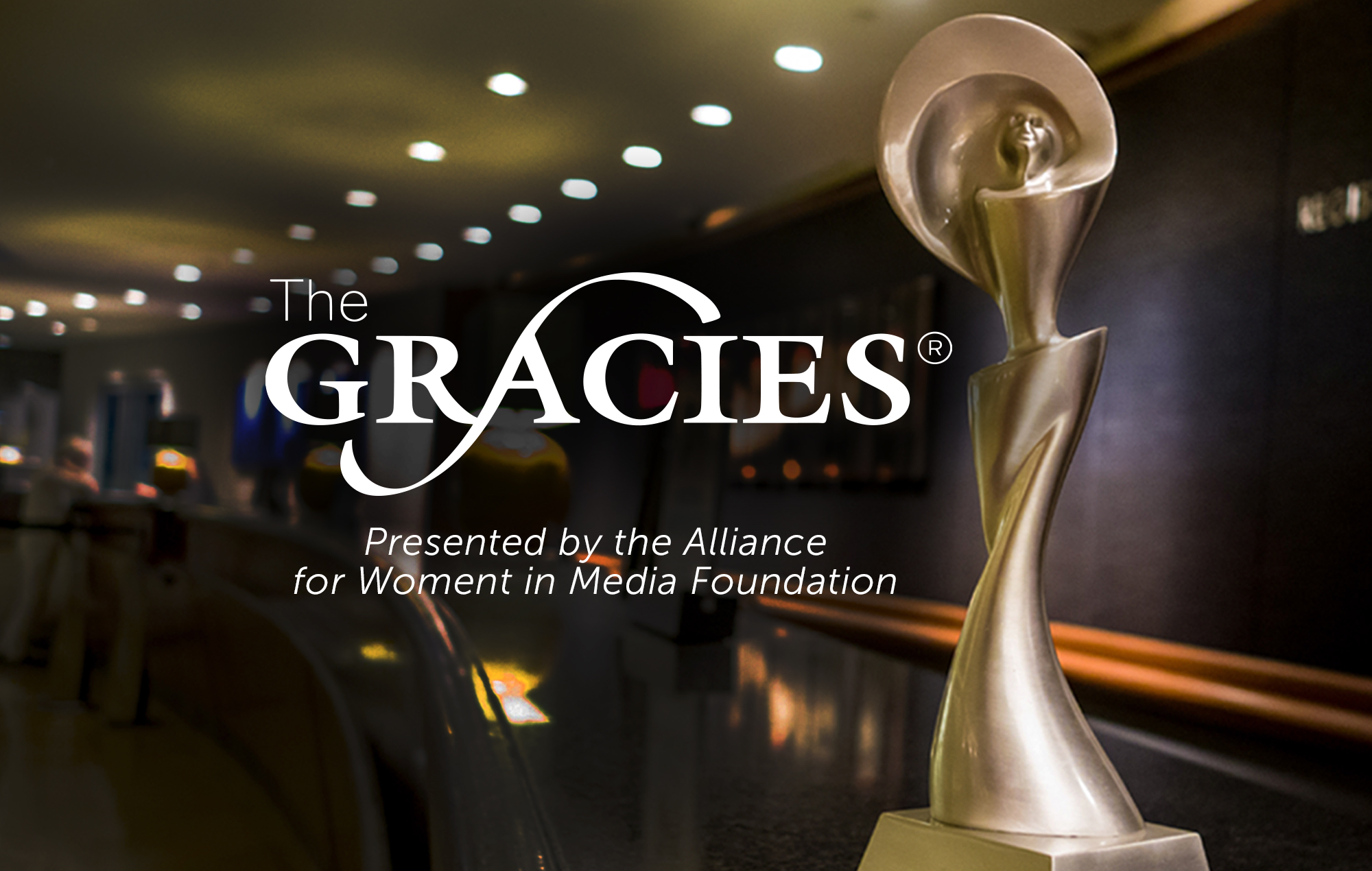 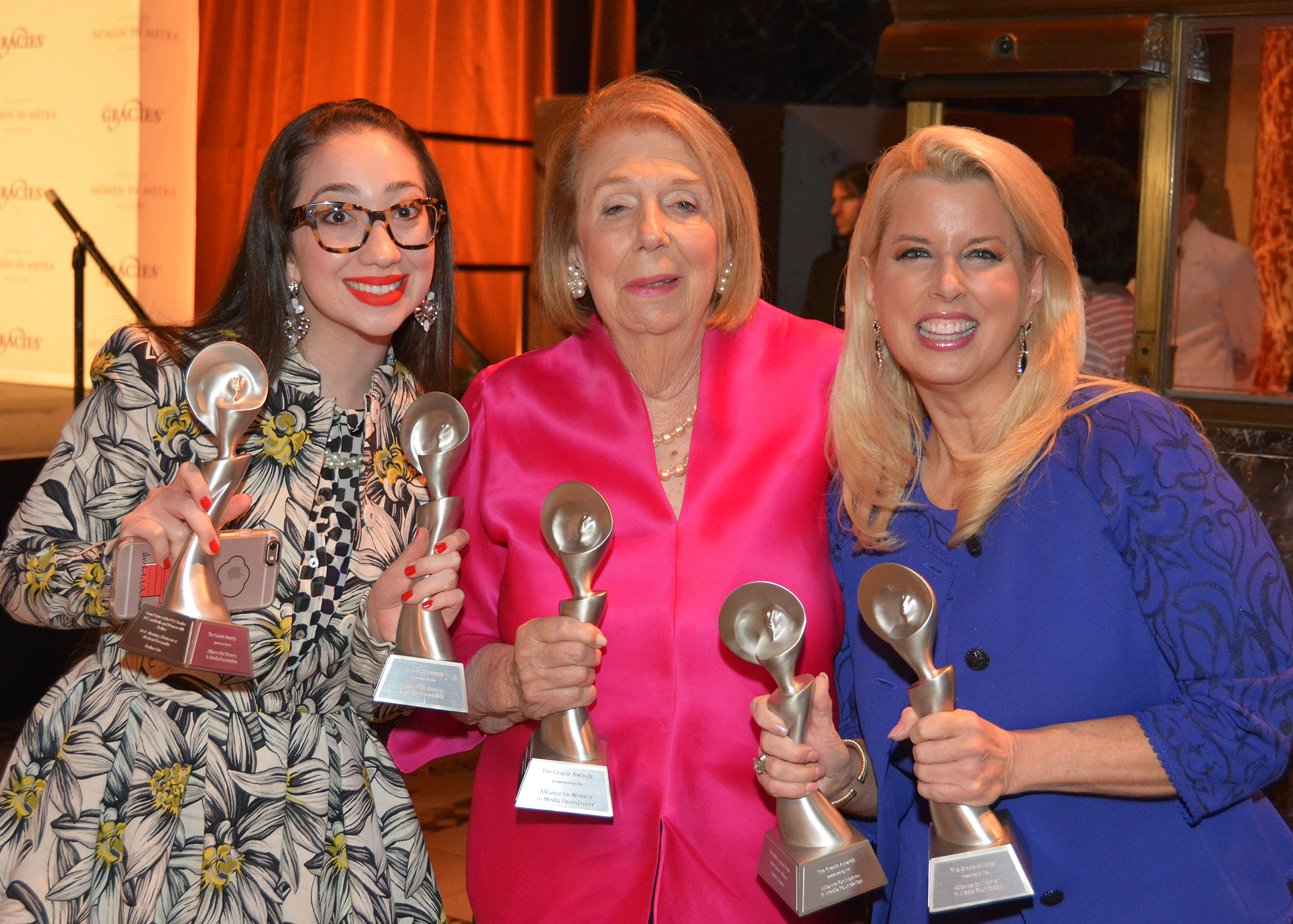 It is call for entries time again for the esteemed Gracie Awards and for me this reminds me of the extraordinary work the Alliance for Women in Media does to honor and embolden women in our fast-paced industry. It also reminds me of a truly special afternoon I shared several months ago with deeply inspiring women from all levels in the business… and all ages. I have been blessed in my decades (yes, decades!) in the broadcasting field to attend many awards ceremonies, but being a part of the Gracies as a presenter and multiple recipient, has been one of the more powerful and profoundly moving times in my career. 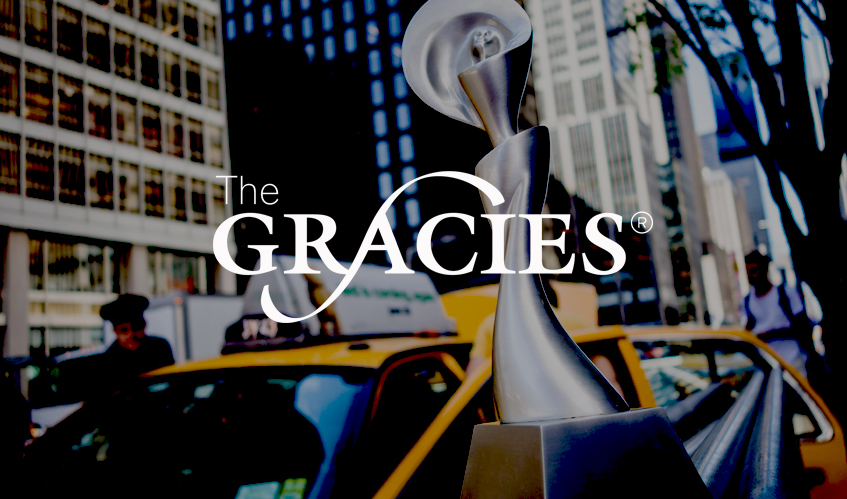 The Gracie Awards recognize exemplary programming created by women, for women and about women in all facets of media and entertainment and individuals who have made inspirational contributions to the industry. The Gracies are celebrated with an evening event on the West Coast and a luncheon on the East Coast. These star-studded events include the visionary women who have spearheaded media progress and those who are the setting the path for the future.

The Live Stream is now closed. To see coverage, quotes and photos from the evening’s events, click here.

After 40 years of honoring outstanding programming by, for and about women, it was time for The Gracies to get a new look.

Enter Tomek Sadurski, an artist specializing in drawing with an eye for diverse media such as animation, theatre and technology. His work has been in international publications like L ́OFFICIEL Paris, Süddeutsche Zeitung, TASCHEN books – Fashion Illustration NOW, 25 Magazine, Folha de Sao Paulo, ELLE, Vanity Fair and many more. He has worked on campaigns and exclusive projects for companies like Vodafone, Ford, Audi Konzept Design Studio, VW, Mitsubishi, Hyundai, Sony and Villeroy&Boch to name a few. The Alliance for Women in Media Foundation was lucky to get him involved! 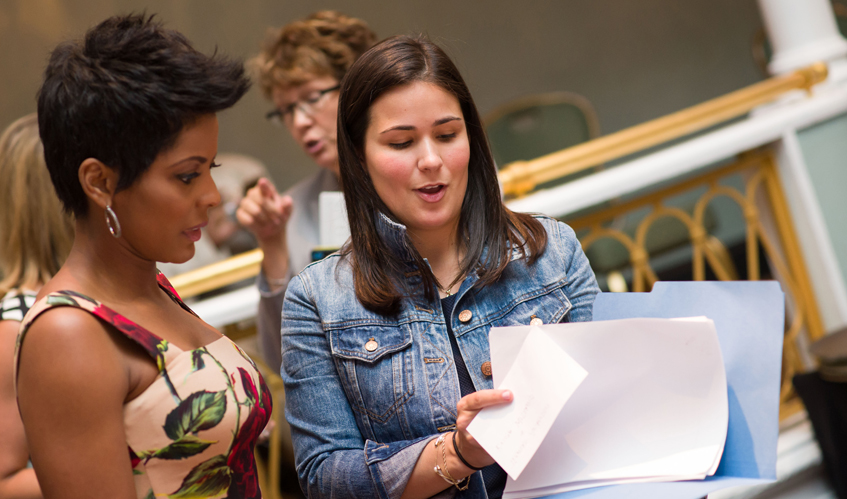